Home/Blog/Why the Schumann is not increasing
Previous Next

What is the Schumann Resonance? 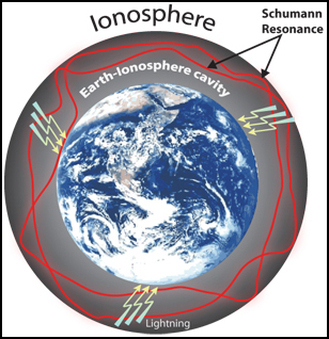 The Schumann Resonance is a series of vibrations (or “Resonances”) that are electro-magnetic standing waves broadcasting in the ionosphere (or energy field of the Earth) which is about 34 miles/55 km above us. 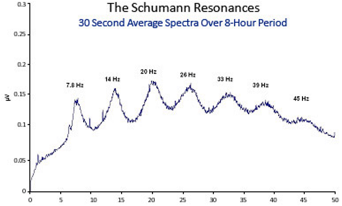 The spherical cavity of the ionosphere above our earth is electrically positively charged, whilst the earth’s surface is negatively charged.  This creates an electrical tension within this cavity that discharges when thunderstorms develop in this cavity.  You know how good you feel after a thunderstorm?  Electromagnetic impulses are generated by electrical discharges such as lightning estimated at an average of 100 strokes per second, that produce the total spectrum of Schumann Resonances starting at approximately 7.8Hz with harmonics of 14, 20, 26, 33, 39, and 45Hz and have a daily variation of + or – 0.5Hz which is caused by the daily increase and decrease in the ionization of the ionosphere due to UV radiation from the sun .  So long as the properties of the Earth’s electromagnetic cavity remains about the same, these frequencies remain the same.  More here.

It is this cavity that is also used in the transfer of wireless information bouncing off radio waves emitted by transmitters on the earth’s surface.  This is how information can be communicated across long distances.  Inventor and physicist Nikola Tesla was one of the first to show this was possible in his experiments in Colorado Springs in 1899.  More here. 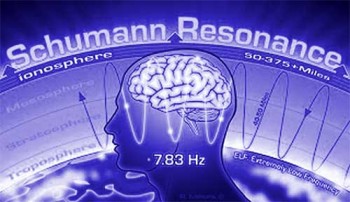 The Schumann Resonance was discovered in 1954 by German physicist Professor W.O. Schumann and Konig.

Interestingly, but certainly not surprisingly, this earthly frequency directly speaks to our brains when we are in our natural waking state as that Alpha brainwave state of alertness varies between about 8-13Hz or cycles per second.

This was confirmed later in 1979 when Schumann’s student and colleague Konig demonstrated the connection between a human EEG recording of the brain showing the main frequency produced by the Schumann Resonance is very close to the frequency of alpha brain rhythms. (e.g. 8Hz).  Other research shows that the frequency of 7.7Hz also occurs in the hippocampus of a rat’s brain. 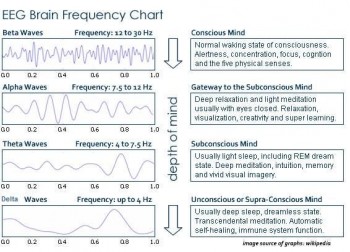 You may find a lot of information being circulated on Facebook and other places on the internet alluding to research saying that the Schumann Resonance is increasing dramatically.  Whilst there is certainly an awakening of consciousness happening (find out more with the Global Consciousness Project here), these claims are not true.  It’s very important at this time, to really listen to what our in-tuition is telling us.  There is much what I call “New Age blah blah” on the internet, a lot of which has been simply copied and pasted and it can be very misleading.  Recently in response to this misinformation, the Heart-Math Institute put out a press release explaining why this is not accurate information.

“There are and always have been 8 different Schumann resonance frequencies. They are the same as they were when first measured in the 1960s. Figure 1 shows most of them, although the highest resonant frequency is not in shown in our data as it is very close to the power line frequency of 60 Hz in the States and is filtered out. If the resonant frequencies were changing it would mean the physical geometry of the Earth-ionosphere cavity was changing. The frequencies can and do change temporarily due to solar storm events, etc. which affects ionosphere shape and conditions, but they return to their base frequencies when things settle down.

Over many years of monitoring the earth’s magnetic field with the Global Coherence Monitoring System, which uses multiple recording stations strategically located around the earth, we have not observed any evidence for the claim that the frequencies of the Schumann resonances are changing beyond the normal diurnal variation. We also have not seen any evidence reported by other monitoring institutions that there is or has been a fundamental change in the frequency of the Schumann resonances. You can see the live data from the Global Coherence Initiative at: https://www.heartmath.org/research/global-coherence/gcms-live-data/

This does not mean that other kinds of “frequencies” related to the shift in consciousness are not increasing – but we cannot measure these, at least yet, and they likely have nothing to do with the Schumann Resonances. For those interested in the deeper science of how the Schumann resonances and other magnetic fields created by the Earth and Sun affect human consciousness, you may enjoy reading the e-book titled The Science of Interconnectivity: http://store.heartmath.org/e-Books/science-of-Interconnectivity.html”

The Heart Math Institute also just got interviewed on 19 June 2017 to clarify the misunderstanding.

Increasingly our lives are becoming busier and busier and as a result, stress, depression, mental health issues, low energy, insomnia etc are becoming far more common.  Scientific research has also shown that our devices can often interfere with the delicate bio-electrics of the body which makes it very important to have beneficial frequencies around us in the form of pendants like the Chi-O-Phi (see more on my next blog) and having access to the use of the Earthing mat called the Omnium 1 by Swiss Bionic that NASA for their astronauts in space.

I had an 8 minute session on this mat back in March 2017 and was amazed at how quickly it boosted my circulation, and I got off the mat feeling very grounded, centred, warm all the way through my body and most importantly deeply relaxed.  In just 8 minutes!

For those of you who don’t have the funds to invest in such amazing technology from the future, there is an easier way!

Would you like to feel uplifted, more positive, get an energy boost (for your 75 trillion cells), accelerate your body’s ability to heal, feel more grounded etc?  Come for a forks session or a session on the mat, or better still learn how to help yourself and others feel so much more relaxed and in tune!  Find out more here and for more on the course which is coming up this weekend in London 24-25 June 2017 please go here.  Other dates also available with an online training due early 2018.  More here.

BENEFITS of PEMF/Earthing may include:-

Experience the life-enhancing benefits of pulsed vibrations from the Earth (the Schumann).
Over 10,000 PEMF studies showing its benefits.  Access what NASA give their astronauts in space!
Watch this video below to learn more.

Hear Ineka and Samantha share their experience of an Earthing Tuning Fork session below.

To train with me online learning how to earth the body naturally using just 5 tuning forks, please go here.

For more on the Omnium mat and to hire or purchase, please go here or here.